Hi, just wanted to post something to show I'm still alive. I've talked about Kixtart before, a scripting language which is great for Windows login scripts. You can do all sorts of neat stuff with group membership and other system variables.

Because I had nothing better to do I decided to make a silly script which only looks cool. Kinda. In this post on the Kixtart forums I showed this little experiment of mine. I was trying to replicate the Matrix digital rain effect, you decide if I succeeded. 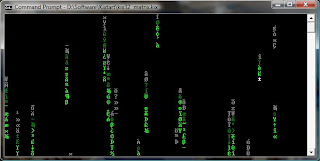 It sort of started a small riot because of the quick and dirty GOTO's I used. Some time later a couple other people built their versions of the digital rain script which were quite incredible. (Multi threading, hiding secret messages in the code.)

Check it out!
Posted by RogierG at 14:41 No comments: Links to this post
Labels: Scripting
Newer Posts Older Posts Home
Subscribe to: Posts (Atom)
Hi, and welcome to my little place on the web. I am an IT professional and I needed a place to put things I figured out earlier. I would like to hear from you if you find my blog helpful.